Painting Appraisal with Art of Estates

Art of Estates’ Appraisal Firm provides valuation services for a host of painting media forms, but the Appraisal field and art world both lack a clear definition of the term painting. Art news sources, including that of Art NEWS, have struggled to put a finger on exactly what the term painting really means. Largely, because of artists in the 20th Century, who were contemporary in their time, sought out to redefine, and bend the rules of established forms of creating works of art.

For the sake of this website, we’ll define paintings as a unique, 1 of 1, work of art that was created by a wet media by hand (without a machine) and transferred to a ground. In other words, not mechanically or in a dry media (as a pastel, pencil or charcoal would be considered). Paintings by that description would include watercolor, oil, acrylic, and gouache. A simple example would be oil from a palette, transferred by hand with a brush to a canvas and finally dried for public purchase and acquisition. While other mediums may be added to these media forms to create a melding of the two, we’ll call those mixed media and include those in our Fine Art Appraisal page. 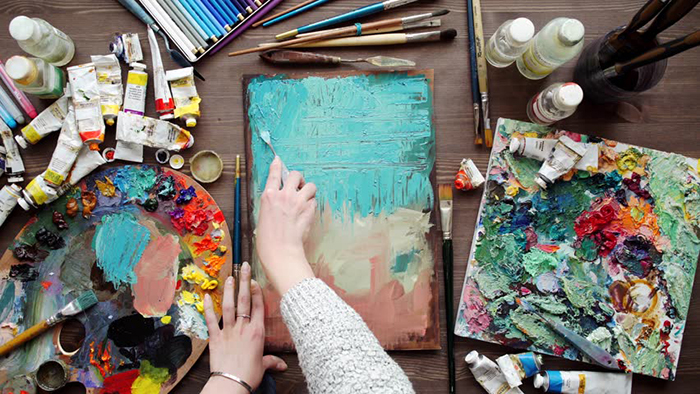 When we appraise art, we collect as much information from our client (usually in the form of provenance), the painting we are inspecting onsite, the market, and from a valuable host of resources when we are performing a formal appraisal report for our clients. All of the information together, collectively as a whole, allows us to make a final conclusion on the value or cost, based on your reports definition in our report. All the information pertaining to value will be included in your appraisal report. Putting all this information together in an organized, professional, and archivable format allows family, future generations, or even a buying art collector to know about your artworks history by providing a visual and virtual snapshot in time of its value (great for estate planning) and condition (great for insurance purposes).

Below, we’ll discuss some the more important art movements, regions and styles. Please note that transitionary periods or styles can be seen in many different levels (of notoriety) in the art world and even within artist’s body of work. Some artists were even early pioneers of a movement, but lacked fanfare, representation or exposure to the market at large, resulting in early failures and late success (Clyfford Still or Bob Ross) or quite the opposite (Wayne Willis or Frederic Shane). However, these concerns depend on a range of other factors of influence, including, but not limited to regional and stylistic trends and/or the economic period placement historically. In the end however, the market dictates the value of your painting(s), not personal opinions.

Descending in time, we’ll talk about some of the more important art movements for painting, the artists who were pioneers or important of those, and when the art movements were most actively followed and produced.

While the 20th Century has been the most eventful period yet to appear in the artworld, the 21st Century will likely be considered the same by the 22nd Century. While technology appears to be moving exponentially faster every year, so does the flow of information from one continent to the other and sub-culture to culture through social media, advanced travel options, and email. This movement of ideas, techniques, education, advances in compositions coupled with increased exposure will continue to foster creativity. Economic fluctuations that now included the Great Recession and political adjustments of the Middle East, including Europe and Great Britain’s Brexit process.

While traditional media in art is still strong with watercolor, oil, acrylic and gouache, techniques frequently being used in the contemporary art market now include video, 3D, virtual reality and a host of modern materials or minerals once thought has waste or unrecyclable entering the field as upcycled, repurposed as well as in the recycled form. While this may sound a bit like assemblage used by collage and folk artists, it has become more prevalent in the Fine Art world and has become more refined with more considerations to its conservation unlike previous generations. A photo below features Ferrofluid, a liquid that becomes magnetized in the presence of a magnetic field. Originally invented by NASA’s Steve Papell in1963 as a liquid rocket fuel is now used by a small number of artists, but most notably by Japanese artist Sachiko Kodam.

Paris, at the time, was ground-zero for the art world in the 19th Century. During this period, patronage of the arts shifted increasingly towards the rich, wealthy and well-educated elite giving rise to the art dealers and critics. The French Academy and Salon represented the traditional establishment, favoring Neoclassicism at the beginning of the century and later Romanticism.

Artists began to push back on this traditional Salon system in the latter half of Century with the progression of Impressionism and Post-Impressionism, early modernism, and the avant-garde movements. Social and political commentary began appearing increasingly in paintings in their lust to change the path of artistic expression.

This was also a period in which Japan began trading globally and began to influence style, technique and provided inspiration in European art.

Paintings during the 18th Century witnessed two influential periods known as the Enlightenment and French Revolution. Known as a light, elaborate and decorative style of art, the paintings of Neoclassicism were most popular in France and associated with the reign of King Louis XV (1715-1774) eventually giving rise to Romanticism.

The 17th Century saw expansions in global trade networks carrying with these networks an exchange of artistic objects, ideas, culture, aesthetics, and styles in Europe. Particularly in France, the country transitioned the consolidation of power under monarchy, whose self-indulgence became visible in Louis XIV’s new royal palace in Versailles. Additionally, the French Royal Academy of Painting and Sculpture became established under the new monarchy. After 80 years of conflict, the Netherlands gained independence from Spain. A robust art market developed seeking , genre, portraits and still life from an affluent merchant class population.

The great variety of artistic production in Europe in the 17th century is often loosely grouped under the Rococo and Baroque movements. The baroque style reflected the crisis of feudalism during a period of initial accumulation of capital and colonial expansion, as well as the growing contradictions in religious and social consciousness. The baroque architectural style was widely used in cathedrals during the Counter-Reformation and was distinguished by its magnificence. The exuberance of Baroque aesthetics combined with the fervor of the Catholic Counter-Reformation is evident in the St. Peter’s Basilica in the Vatican. The penchant for Baroque art was not isolated to Europe, but also made it to the Americas, most notably in Mexico and Peru, as evidenced by ornate religious buildings.

Following the Middle Ages came the Renaissance when Europe regained interest in the classical learning and values of ancient Greece and Rome. In addition to its expression of classical Greco-Roman traditions, Renaissance art provided insight into the individual beauty and mystery of the natural world. With it, came a new system of astronomy and the discovery and exploration of new continents followed by a flowering of philosophy, literature, political stability, prosperity, art and the printing press. The style of painting, sculpture and decorative arts identified with the Renaissance emerged in Italy in the late 14th Century reaching its height in the late 15th Century and early 16th Century.

These centuries were primarily controlled by the Proto renaissance movement, denoting art from northern Italy largely from 1280-1400. A form that wasn’t quite Gothic or Romanesque, but is considered the primary influence of the Renaissance period. Painting subjects were largely religious and often included halos around the heads of figures.