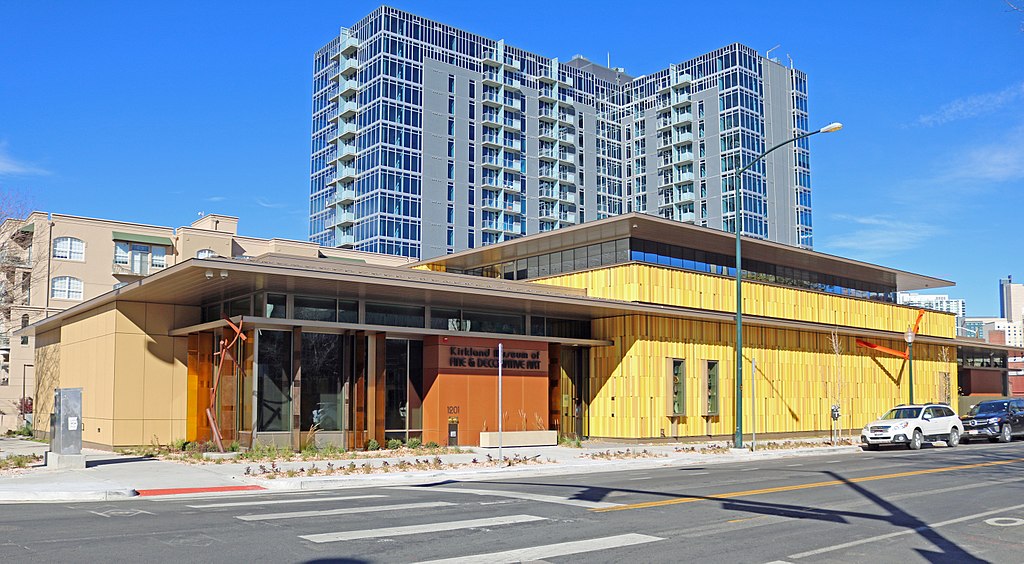 Known as “the Father of Modern Colorado Painting,” Vance Kirkland was an instrumental aspect of the development of art in Colorado and possibly one of Colorado’s most famous artists. The artist worked in a variety of mediums and styles throughout his career, and he left a definite impact on contemporary art both in Colorado and around the world. Vance Hall Kirkland was born on November 3, 1904, in Convoy, Ohio. Convoy was a small rural town on the border of Ohio and Indiana. His father was a dentist and was not supportive of the young man’s decision to become an artist. Kirkland persisted, however, and decided to attend art school. 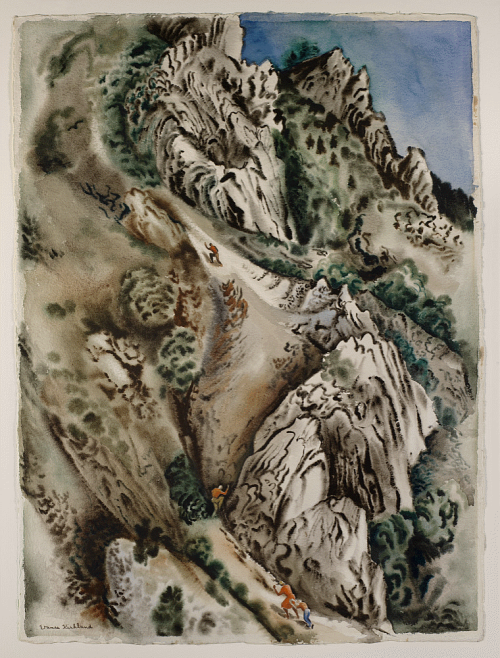 ​From 1923 – 1928, the artist attended the Cleveland School of Art in Cleveland, Ohio, now called the Cleveland Institute of Art. He attained his Bachelor of Education in Arts degree in 1928. In 1926 his freshman watercolor instructor failed the artist for painting imaginary colors into landscape paintings. Kirkland felt that the added colors made the paintings more unique, a vision that he would stick to in his later career. The artist proceeded to win the first prize in a watercolor competition at the Cleveland School of Art for his painting The Old Barn, Convoy, Ohio. (1926).

Kirkland did find support from other teachers at the school during his time there, notably from professor Bill Eastman. The artist was also influenced by Henry Keller, who had previously been included in the Armory Show in 1913, and Frank Wilcox, a watercolor painter. He was again awarded the first prize in watercolor painting in his senior year at the art school for his painting The Brewery (Ohio) (1927). He followed this success by winning an honorable mention for the same painting in the 1927 May Show at the Cleveland Museum of Art. While a student, Kirkland took liberal arts courses at Western Reserve and the Cleveland School of Education to gain experience and certifications for teaching.

In 1928 the artist took a painting trip to the West & Southwest. His trip included a visit to the state of Colorado. In 1929, Kirkland moved to Colorado to become the founding director of the school of art at the University of Denver. The school had initially been called the Chappell School of Art. It was around this time that Kirkland married his wife, Anne Fox Oliphant, in Denver. They would remain together until Anne passed away in 1970.

Kirkland Worked in Five Distinctive Styles Throughout his Life

Kirkland’s productivity regarding his painting throughout his life can be characterized as taking on five distinctive periods. These periods are Designed Realism, Surrealism, Hard Edge Abstraction, Abstract Expressionism, and Dot Paintings. Dianne Perry Vanderlip, Curator Emeritus at the Denver Art Museum from 1978 – 2008, stated that Kirkland’s paintings mainly comment upon the adventure of the human spirit on its journey in the universe through time. Possibly of the most significant about Kirkland’s five painting periods, as noted by various scholars throughout the art world, is that Kirkland contributed something meaningful to each style during his time working within its framework. 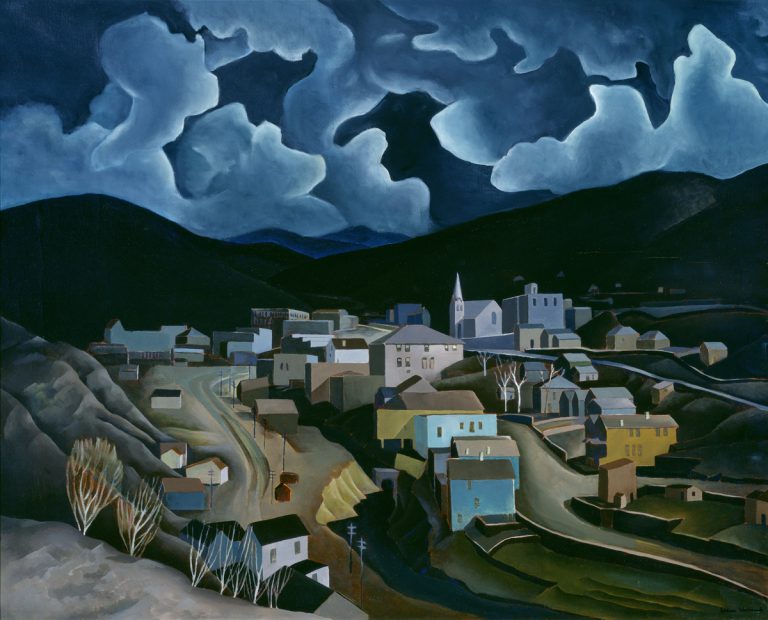 Kirkland’s first period of artistic production is known as Designed Realism and lasted from 1926 – 1944 when the artist was aged 22 to 40. The artist worked throughout this period, mostly in the mediums of watercolor and oil paint. Amongst water-based media, Kirkland used a variety of types, including aquarelle, gouache, casein, and egg tempera. In comparison to water-based media, that artist made fewer oil paintings during this time.

Kirkland took a heavy dosage of inspiration from the Regionalism school in America during the 1930s. Regionalism was an American modern art movement that featured realist images of America’s small towns and countryside. The school and the artists who followed in its footsteps of it took on a direct contradictory pose to the prevailing schools of abstraction that had taken hold in Europe and New York City. Regionalists sought to depict the American countryside (primarily the Midwest) in a positive light during the throes of the Great Depression.

Among the most influential artists of the Regionalism school were John Stuart Curry, Grant Wood, and Thomas Hart Benton. Vance Kirkland’s designed realism period was characterized by representational painting with simplified shapes and multiple perspectives. An example of the painting style is Moonlit in Central City, 1935. The oil painting exhibits a series of smooth flat roads moving away from the viewer and into a small town. Each building, rather than having the various textures and devices that would typically be on its face, is instead rendered as a flat shape. The mountains in the background are also a flat dark tone. Another work that aptly describes Kirkland’s sensibilities for painting in this period is in the Nelson-Atkins Museum of Art and is known as Mountain Climbers, 1941. Due to the Regionalist inclination that Kirkland showed from 1932 – 1942, the artist was included periodically in the Midwestern Artists’ Exhibition at the Kansas City Art Institute. Kirkland exhibited in 1932, 1937, 1939, 1940, 1941 & 1942. Thomas Hart Benton taught at the Kansas City Art Institute from 1935 – 1941. Benton undoubtedly would have been involved in the selection of artists for the regionalism exhibitions, thus establishing a connection between the two great Regionalist painters. 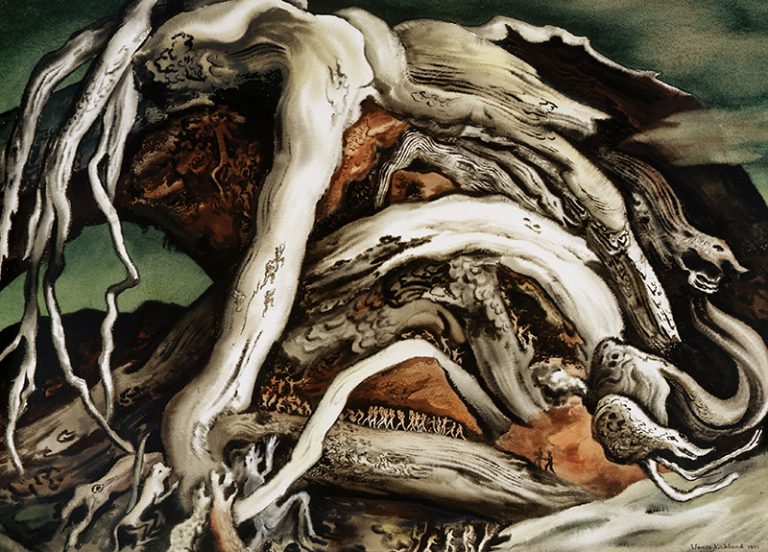 Vance Kirkland’s second artistic painting period was his Surrealist years. The paintings from this period feature vegetation that twists and turns into various shapes, dwarfing prehistoric humans who run and hide among it. Kirkland’s mastery of the watercolor medium at this point allowed him to experiment with form and content in the way he did. Kirkland would receive inspiration for his Surrealist compositions from his hikes through the Rocky Mountains.

Many of Kirkland’s Surrealist compositions feature flora and fauna shapes in strange otherworldly environments. Many of the paintings also feature dramatic lighting, with dark backgrounds and brightly lit flora in the foreground. In characteristic Surrealist style, the branches and trees of his paintings exist in an open space, with a vast sky hovering above each conglomeration of fauna.

One of the paintings that distinctively features this style of artistry is from the Kirkland Museum of Fine & Decorative Art in Denver, Colorado. The work, 6 Million Years Ago (1945), features a series of branches in a grayish tone morphing around a central ball of energy, rendered in a red hue. An open landscape sits in the background of the primary tree branches, which are brightly lit in contrast to the darker tones behind it. A series of rat-like animals are featured in the bottom left of the composition, clawing upwards at the group of tree branches. One can see a larger version of this type of creature in the lower right, with its two legs moving toward the outside of the painting.

Among the artists that Kirkland was compared to as a Surrealist include many household names. Artists such as Salvador Dali, Giorgio de Chirico, Max Ernst, Paul Klee, Rene Magritte & Raymond Georges Tanguy were among the noted Surrealists of the day. Kirkland would have a show with Max Ernst in New York City. Surrealism as a movement had initially taken hold in Europe, among the artistic circles of Paris. It was not long; however, before American artists were painting like the Europeans, as ideas spread across the Atlantic Ocean.

Kirkland Switches to Oil as he Explores Hard Edge Abstraction 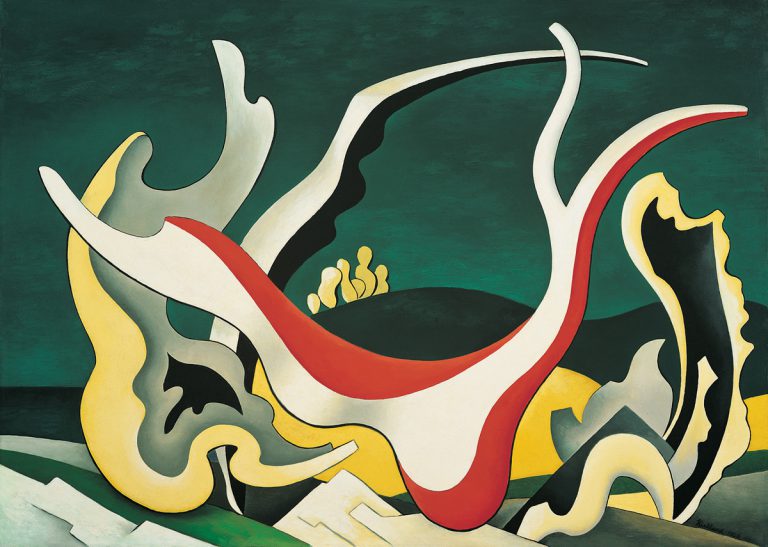 Vance Kirkland’s third period of painting is known as Hard Edge Abstraction. Kirkland worked in both watercolors and oil paint during this period. His main transition to oils came with the painting Near Evans Ranch (1947), Red Rocks (1947) & Mountain Rhythms (1948). This period includes Kirkland’s Timberline series, in which he would depict his reflections on his experiences with nature. Kirkland was represented by the New York gallery Knoedler & Company during his Surrealist and Hard Edge Abstraction years.

It was during this period that Kirkland first mixed oil paint and watercolor. The texture of the bubbles of the water gave Kirkland’s paintings a unique surface. The artist would use the specific technique of laying the painting on the table and then pouring water and oil paint on the surface. 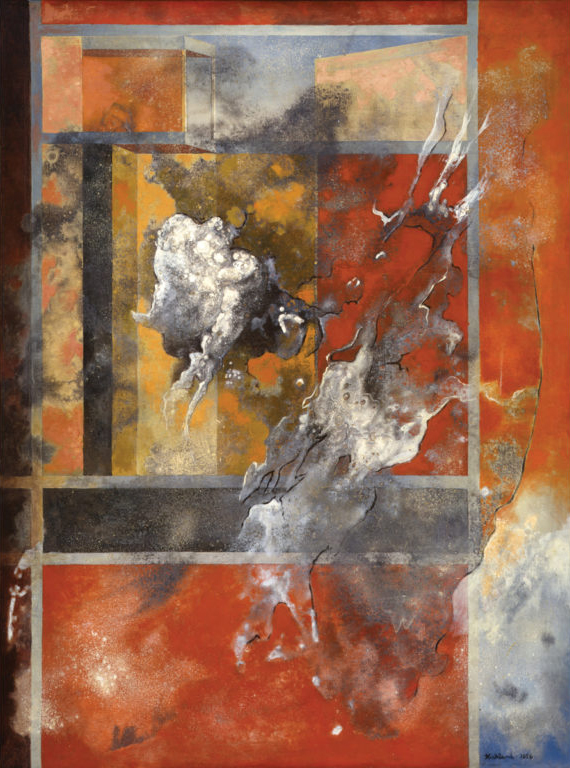 The group was protesting the beginning of a juried show hosted by the Metropolitan Museum of Art titled American Painting Today – 1950. The specific complaint of the group was the Metropolitan Museum’s lack of respect for abstract painting, as the artists working in this style were among the first to do so. Of the artists represented among this first group of Abstract Expressionists, Mark Rothko stands out for his influence on some Denver-based artists.

Clyfford Still, another noted abstract artist of the 20th century, has a museum next to the Kirkland Museum of Fine & Decorative Art. Clyfford Still is known as one of the original Irascibles or Irascible 18, which included blue-chip artists Mark Rothko, Robert Motherwell, Adolph Gottlieb, Willem de Kooning, Jackson Pollock, and several other notable artists.

Like Kirkland, the Irascibles were known as one of the most anti-establishment groups of artists due to the development of Still’s unwavering views and animosity towards the art world. The artist worked in New York at the height of the Abstract Expressionist period and eventually left for Maryland upon his frustration with the art establishment. The artist would live in Maryland until his death in 1980. In 1979, the Metropolitan Museum of Art held a survey of the artist’s work in the largest show for a living artist the museum had ever organized up to that date.

Vance Kirkland‘s final period of painting was known as his “dot” period. This art period is the artist’s most desirable in terms of marketability. Kirkland’s paintings at this time were concerned with the energy of the Cosmos. Within the artist’s dot period were four eras. These included Energy of Vibrations in Space, Energy of Mysteries in Space, Energy of Explosions in Space, and Energy of Forces in Space, and occasionally the artist would do pure abstractions. The Denver Art Museum also holds work from this period of the artist. Blue Mysteries Near the Sun, No. 4, 1976, is owned by the museum as a Gift from Vance H. and Anne O. Kirkland. 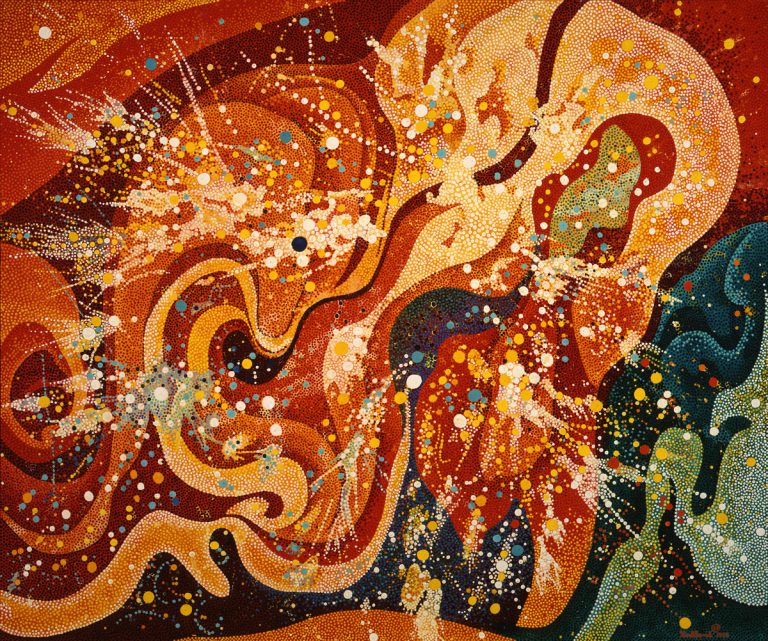 The art market knows that an artist’s exposure through museums and exhibitions can increase notoriety. Therefore, moving the Kirkland Museum in 2016 within walking distance of the Denver Art Museum and across the street from the Clyfford Still Museum appears to be paying off. The Kirkland Museum, which was once an out-of-the-way collection lacking parking, is now the recipient of overflow attendance and better visibility from neighboring museums. This uptick in attendance and new public relations has undeniably led to more visibility of Vance Kirkland’s artistic abilities.

In November of 2019, the painting Explosions on 20 Billion Years Ago was sold at Leslie Hindman Auctioneers based in Chicago, Illinois. The painting was consigned by a Denver, Colorado collector and sold in the Arts of the American West sale. The dot-style oil painting on canvas sold for $67,500, setting a record for the artist’s market. Vance Kirkland remains a historically relevant artist for Denver, Colorado, and Cleveland, Ohio. The artist’s explorations of painting principles and different styles of composition make his paintings desirable to connoisseurs of Surrealism, Abstract-Expressionism, Regionalism, and abstract art.

If you have oil paintings by Vance Kirkland, it would be good worth wise to have the painting professionally appraised by an accredited art appraiser. For an obligation less estimate for art consulting or art appraisal services from Art of Estates, consider utilizing our Appraisal Online process today.