The Cincinnati Art Museum is notable in the Tri-State area for its expansive collection of art. The museum represents many African American artists. Possibly one of the earliest of these artists is Robert Seldon Duncanson (1821-1872). Duncanson was born in New York in 1821. Duncanson was a descendant of free African Americans from Virginia who had been emancipated from their owners. Specifically, his grandfather, Charles Duncanson, was freed and allowed to learn a trade for being the owner’s illegitimate son. Due to increasing resentment towards free African Americans in Virginia at the end of the 1700s, Robert Duncanson’s descendants moved north to New York, as did many free African Americans from the South at that time. This is where Duncanson learned the trade of carpentry and house painting from his family. These artisan skills would later assist with his quest to be a fine artist around 1940 when he would leave the family to begin painting fine art. After leaving Michigan, Duncanson began depicting landscapes in the untamed parts of the Cincinnati countryside during an instrumental time in the city’s history.

Duncanson would later become known as the first African American artist to take the Grand Tour in Europe, after being sponsored by Nicholas Longworth (1783-1863), Cincinnati’s most generous art patron at the time. Duncanson and Longworth continue to influence the Cincinnati art scene today with the Duncanson Artist-in-Residence program at the Taft Museum of art. The residency grants a large sum to an African American artist and provides housing and food in return for the artist doing a project in Cincinnati, Ohio. 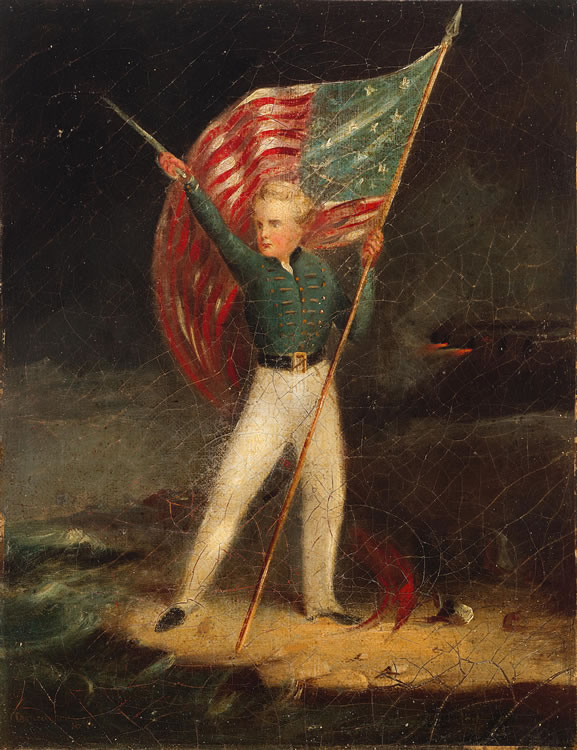 The Hudson River School was part of a general sweeping narrative of reform among middle-class urban voters in the mid-19th century known as the Young America movement. Associates of the movement advocated for social reform, and free trade and were supportive of the abolition of slavery. The movement would become assimilated within the Democratic party in the 1850s, on the eve of the Civil War.

Cincinnati was a crossing point between the free North and slave-holding Southern states before the Civil War. The burgeoning city was a haven for freed slaves and had a thriving African American community. However, the city still maintained extensive trade relations with the many Southern States, partly due to the Ohio River trade and transportation. Due to this, a sizable population of Southern sympathizers dwelled within the city limits. Race riots amongst the white and African American populations occurred at various points throughout the 19th century.

The traveling exhibit has been influential in many cities to date. For instance, the Detroit Institute of Art saw a 16% increase in the expected attendance of the exhibition would be, and 40% of the visitors were African American. Another effect of the 30 Americans exhibition traveling around the country is the increasing value and collection of contemporary African American art. Top collectors include standard household names such as Bernard and Shirley Kinsey, but also celebrities like Oprah Winfrey, NBA player Elliot Perry, and hip-hop stars including Jay-Z with Beyoncé who are promoting African American artists through their patronage. African American artists such as Jean-Michel Basquiat, Kerry James Marshall , Firelei Báez , Barkley L. Hendricks , Amy Sherald , Derrick Adams , and Mark Bradford have seen incredible leaps in their secondary auction market value in the last decade. 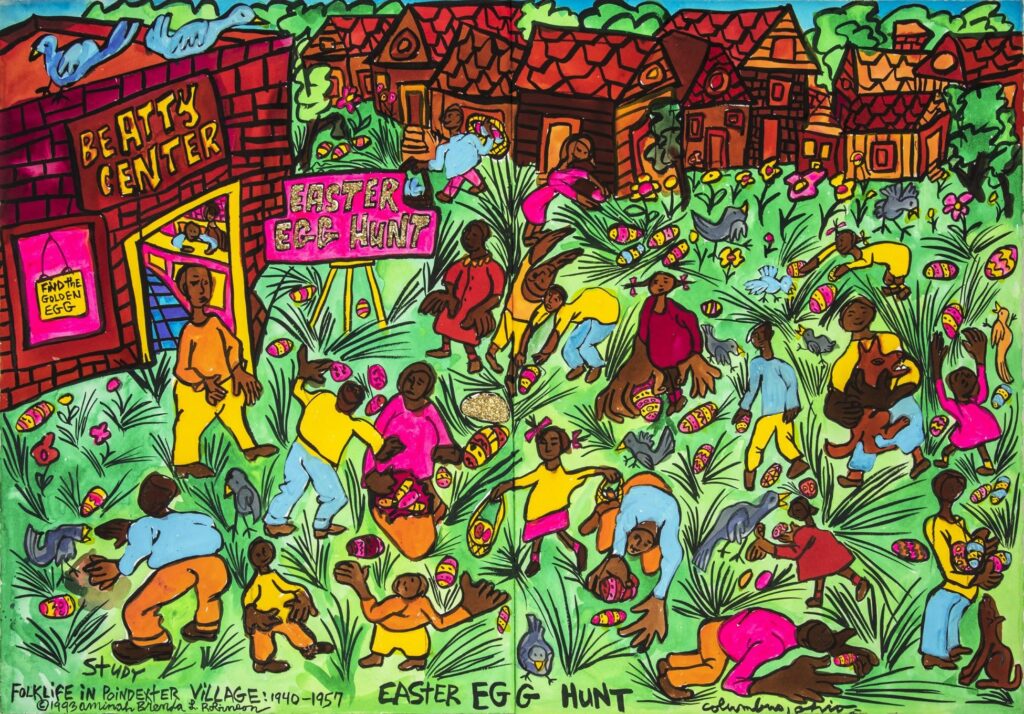 The Columbus Museum of Art also holds works by well-known African American artists. Currently, Aminah Brenda Lynn Robinson’s exhibition titled Raggin’ On: The Art of Aminah Robinson’s House and Journals is on display at the museum. Robinson was a McArthur Grant awardee from Columbus, Ohio and upon her passing in 2015, donated her entire collection to the Columbus Museum of Art. The exhibition features seven decades of the artist’s work and allows visitors to experience the creator’s home. The viewer can also look through the artist’s vast number of journals, sculptures, pins, blankets, and much more. Robinson’s goal in art was to document and celebrate the African American community’s spirit through hundreds of years of oppression.

Robinson was fascinated by the Ghanaian. The concept of Sankofa, or “looking back” into the past to learn and thus make positive steps for the future. A bird illustrates the idea with its long neck and head looking back over its body while its feet are in a forward direction. The bird is carrying a precious egg. Robinson was also inspired by the election of Barack Obama, the first African American president of the United States. This theme made up her last significant body of work. The artist did not have a computer in her house, so she researched Obama through articles in the newspaper and the daily news on TV. The title of the body of work was Aminah’s Presidential Suite. The artist states that she had a vision from God that inspired the production of the work. It was meant to represent the hope in many American’

The tight-knit African American community significantly influenced Robinson’s work in Poindexter Village, Columbus as a child. These cultural influences led to the theme in her work of people everywhere around the world living lives that are like each other. She stated that upon going to Africa in 1979, she witnessed the same close-knit Columbus neighborhood she grew up in, just on a different continent. She was struck by the realization that in every society, people lived similarly. They socialize with their families and friends, went to the market, worked to make a living, and tried to enjoy themselves. She saw the same community she had been a part of as a child, but in Africa.

The Columbus Museum of Art further memorialized Robinson by creating the Aminah Robinson Fellowship and Residency. This program allows an artist to stay in Robinson’s home to feel what she was experiencing when making her art while in the process. 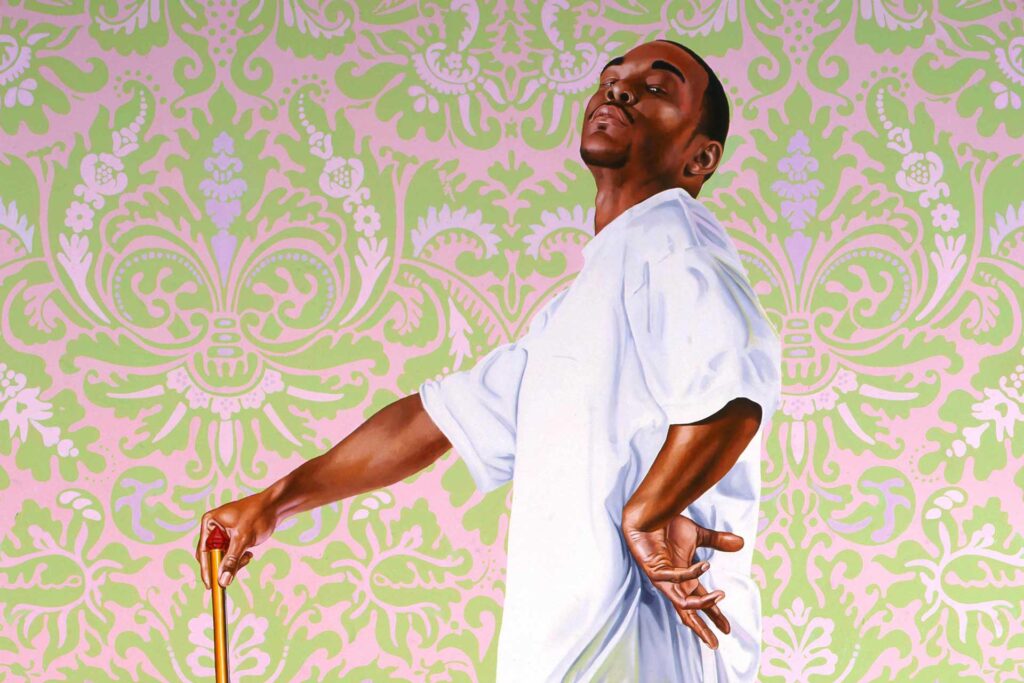 In 2006, the Columbus Museum of Art purchased a painting by Kehinde Wiley (b. 1977). The large-scale enameled, oil on canvas titled Portrait of Andries Stilte. The painting features a young-adult African American man wearing cherry red Timberland white-soled boots, NBA team patched baggy blue jeans, oversized white t-shirt while sporting a ruby-topped cane. While the description reads like a basic painting, what takes it to another level is the acanthus and laurel leaf-styled fleur-de-lis repeating background over pink that makes the figure pop in a royal portraiture style. It is this “reimagining old master painting with black protagonists” style that permeates Wiley’s most notable painting style. However, Wiley’s most newsworthy achievement in recent times has been his selection by Barack Obama to paint his presidential portrait, which now hangs in the National Portrait Gallery in Washington, D.C.

In 2011, the Cincinnati Art Museum acquired a collage and mixed media painting on masonite by Romare Bearden (1911-1988). The smaller-scaled artwork titled Mill Hand’s Lunch Bucket from the series profile one series captures a combination of modern industrialization, aging of life, hard work, and the boarding life of blue-collar steel mill workers in Pittsburgh, Pennsylvania. Bearden refers to the assemblage work as a composite self-portrait. Bearden is well noted as an activist, spearheading the art collective known as The Spiral. A Harlem New York-based alliance which focused on artists and their role in the civil rights movement.

If you are considering building an art collection or need insurance coverage on your African American art, consider contacting Art of Estates for a no-obligation quote. We offer professional fine art appraisal services from Aspen, Colorado to Cincinnati, Ohio.